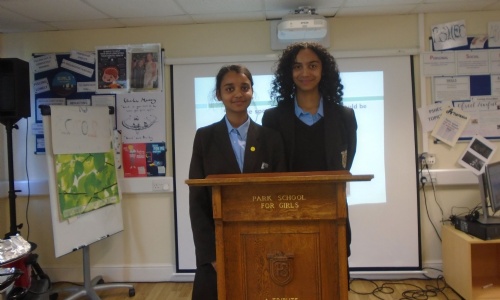 Last week's senior school assembly was devoted to an inter-house debate between two Year 8 pupils representing 'Valentines' and 'Wanstead.' Olivia ('Valentines') and Sanvi ('Wanstead') were debating the motion: 'This house believes that extreme sports are dangerous and should be banned.' The girls had studied debating in their English class as part of their non-fiction language unit earlier in the academic year and had been voted by their peers to represent their houses in front of the staff and senior school. Olivia, speaking for the motion, impressed everybody with the range of her well-considered and articulate points whilst Sanvi countered these arguments with considerable conviction. As well as delivering their speeches, the girls had to cope with questions and points of order arising from the speeches that they made. The students who made up the floor were asked to indicate which of the two speakers they were voting for by waving a flag in the colour of the participating houses. In the end, Olivia's house, 'Valentines' emerged victorious. Mrs Redfern, the Headteacher, was obviously impressed at the high standard of debating that she witnessed and we are grateful to Ms Naseem for preparing the girls for the occasion so thoroughly. As interested as some staff appeared to be by the arguments put forward, it is doubtful that we shall see Mr Fernandez and Mr Sfakianakis BASE jumping from the second floor of the building into the car park any time soon.